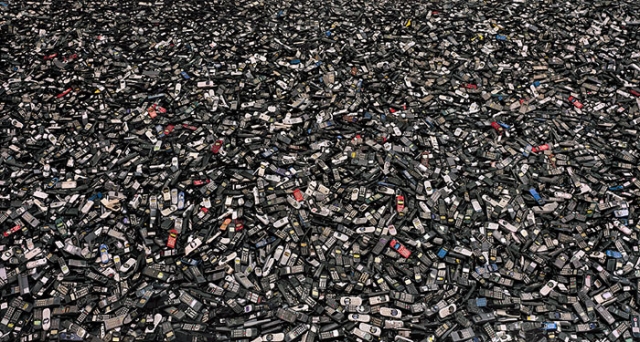 Discarded Cell Phones in a Garbage Dump. Every year perfectly working Cell Phones end up in dump due to users upgrading to a newer model

In today’s technological age, most of us can hardly imagine life without our cell phones. We use them for everything – work, keeping in touch with family and friends, entertainment, surfing the Internet, listening to music and just about anything else you can imagine. Even though we love our cell phones, it’s hard to stick with just one for very long. New and improved models with more bells and whistles hit the market, forcing us to believe that we just have to upgrade.

There are some programs that recycle phones and resell them in foreign markets. The spare parts and those that just simply get trash end up in landfills. The toxins used in creating the phone and its battery – namely mercury and lead – seep into the water supply and, over time, end up exposing millions of people to their harmful effects via not only the water supply, but the plants and animals used for food that drink the water as well.

There has also been lots of great debates about heavy cell phone usage being linked to the increased incidents of certain types of cancers. Although research hasn’t proven a distinct link between cell phone usage and cancer, researchers say there is enough evidence that people should be concerned about the possibility.

While there’s not much that can remedy the damage that’s already been done, there are ways to keep from doing more damage to both ourselves and our environment in the future. Use your cell phone for as long as you can and refrain from buying an upgrade every time one becomes available. The longer you use it, the longer it stays out of the landfills. If you do have to get a new phone, make sure you turn your old one over to a program that recycles or disposes of them in the most environmentally friendly ways as possible. If just one out of every three of the billions of cell phone users in the world would follow these simple suggestions, it would go a long way toward reducing the risks that cell phones pose to the future of our environment.